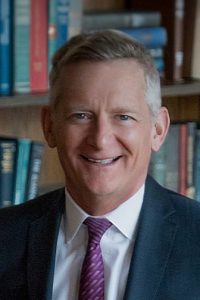 The University of Denver has chosen Jeremy Haefner as its 19th chancellor.

Haefner, who earned a master’s degree and PhD in mathematics from the University of Wisconsin-Madison in 1983 and 1986, respectively, joined the University of Denver in 2018, serving as provost and executive vice chancellor. He previously held the positions of provost and senior vice president for academic affairs at Rochester Institute of Technology for 10 years.

As a mathematician, Haefner studied integral representation and module theory, and his research has been published in Communications in Algebra, the Journal of Algebra and American Mathematical Society, among other journals. He has also written on topics in higher education, such as supporting diversity in leadership and enhancing the student experience.

Denise O’Leary, chair of the University of Denver Board of Trustees, stated that Haefner has done remarkable work in the past year, including championing transparency and respect for shared governance, spearheaded efforts to share more regular and thorough updates on budget processes and improved lines of communication.

“Our community has, in Jeremy, a national thought leader in student and academic success, a great communicator and an individual personally committed to advancing the university and further expanding our diverse and inclusive community and shared values,” she wrote.