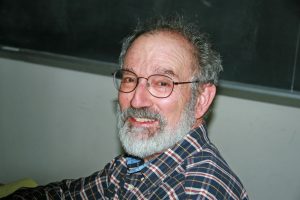 n Kunen died peacefully on 8/14/2020.  He was born in New York City in 1943 and got his undergraduate degree at Caltech. He received his PhD from Stanford University in 1968, under the direction of Dana Scott, and came to Wisconsin that same year. He was quickly promoted to Associate Professor in 1970 and Full Professor in 1972. Except for a year visiting the University of California, Berkeley, and two years visiting the University of Texas, Austin, Ken had been in Madison ever since, retiring in the Summer of 2008. Ken was married to Anne Kunen and they had two sons, Adam and Isaac.

His many honors included an Alfred P. Sloan Fellowship and H.I. Romnes Fellowship. Ken had been an editor for the Annals of Mathematical Logic, the Journal of Symbolic Logic, the LMS Journal of Computation and Mathematics, and the AMS Transactions. He, with Jerry Vaughan, edited the influential Handbook of Set-Theoretic Topology. Ken also edited the set theory section of the Handbook of Mathematical Logic. Ken had given an enormous number of invited lectures in the US and throughout the world, and he had helped to organize many math conferences.

In over one hundred and fifteen research papers, Ken had contributed fundamental knowledge to set theory and its applications to various areas of mathematics, such as set-theoretic topology and measure theory. In addition he had worked in the area of non-associative algebraic systems and used computers to derive theorems. His seminal textbook Set Theory. An Introduction to Independence Proofs has been an influential force and inspiration to countless numbers of graduate students and others working in the field of mathematical logic.

Ken had been one of the central figures in the UW Madison logic group. He had directed the doctoral dissertations of over 25 graduate students. This includes many who have gone on to great careers and had students of their own, such as William Fleissner, Ali Enayat, Boban Velickovic, and Mirna Džamonja, to name only a few.

Ken was not just a brilliant and productive mathematician but what we really admired most about him was his generosity with his mathematical ideas, conjectures, and problems. Plus, he was always affable and always unflappable.

In the mathematics department, he had served on several of our more important committees, e.g., chair of the committee on future needs in computing and technology, graduate advising committee, chair of the academic staff review committee, salary committee, and hiring committee.  Ken was legendary for the creative but fair problems he set in the logic qualifying exam committee.

A popular teacher for both undergraduate and graduate courses, he was particularly well known for his eloquent and incisive style of lecturing. Ken was also famous for the mountainous heaps of model polyhedra which overflow his office. These models were made for him over the last 20 years by the students in his Math 131 class (Geometry for Elementary School Teachers).