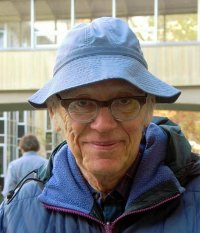 Josh Chover died on October 11, 2020.  He received the PhD from the University of Michigan in 1952. After three years at Bell Labs and one year at the Institute for Advanced Study in Princeton, he joined our faculty in 1956. He was Chair of the Department fom 1977-79.  Josh started our probability group by hiring Peter Ney.

He officially retired at the end of the 1992 calendar year and took up post-retirement employment which ended in 1993. Josh had served the department for 36 years, plus 5 additional part­ time years as an emeritus professor.

Josh’s research had centered on probability theory and stochastic processes. More recently he had turned his attention to the study of mathematical models in biology, studying the brain via neural networks with random connections. Five graduate students completed dissertations under his supervision.

Josh was devoted to teaching and curriculum development on both the undergraduate and graduate level, and wrote “The Green Book of Calculus” in 1972 for a course he developed here. He was the originator of the idea of the Wednesday Noon Talks and brought many lively and informative lectures to Van Vleck Hall from around campus.

His entire life he enjoyed painting and was exhibited at the Pyle Center in 2016.