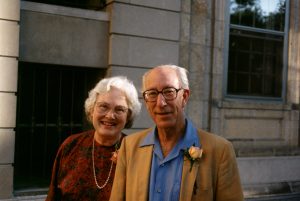 May 2, 2021 marks what would have been Walter Rudin’s 100th birthday. Walter Rudin was one of the preeminent mathematicians of his generation. He worked in a number of different areas of mathematical analysis, and he made major contributions to each.  He came to the UW in 1959 and stayed until his retirement in 1991. He and his wife, the distinguished mathematician Mary Ellen (Estill) Rudin, were popular teachers at both the undergraduate and graduate level and served as mentors for many graduate students.  The duo were active in the daily life of the math department, and enjoyed collaborating with their colleagues as well.

Walter Rudin is also known to generations of undergraduate and graduate students for his three outstanding textbooks: Principles of Mathematical Analysis (1953), Real and Complex Analysis (1966), and Functional Analysis (1973). His books have been reprinted in several different languages.  In 1993 he was awarded the American Mathematical Society’s Leroy P. Steele Prize for Mathematical Exposition. He received an honorary degree from the University of Vienna in 2006.