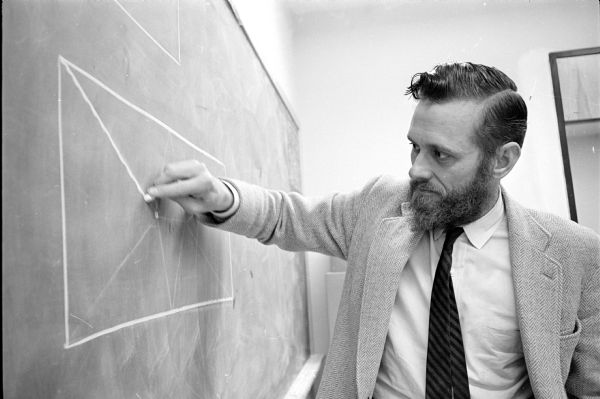 Donald was a distinguished professor of mathematics at UW-Madison from 1962 through 1998. As a geometer specializing in the study of symmetry and patterns in primitive art he had the opportunity to bring artists and scientists together in a unique and rewarding collaboration. His work was Internationally recognized and allowed him to travel extensively worldwide and share ideas with some of the best minds in his field of study.

He co-authored three books and published many articles and papers over his career. While UW-Madison was his home-base, his love of travel also led him to professional positions in such places as Nigeria, Hungary, Australia, England, Tonga, Ghana, and Canada.

Donald remained intellectually active throughout his life, always seeking out new knowledge and understanding of the world around him. He was keenly interested in world politics and kept abreast of current world events.  He took pleasure in meeting new people and enjoyed engaging in thoughtful conversation on almost any topic.

He and his wife, Mary, traveled extensively and shared many adventures, traveling the back roads so as to better understand the lands they visited.  After retirement they spent the winters in the Anza Borrego Desert of California, a region that fascinated Donald and of which he was very fond.

Donald developed many meaningful friendships with his colleagues and students at the UW Math Department. Of special importance was his enduring friendship with his dear friend Steve Bauman. In recent years the weekly “Old Guys” luncheon gatherings with his Math Department colleagues became an important part of his life.

Donald was active with the Bridges Organization, which oversees the annual Bridges conference on mathematical connections in art, music, architecture, and culture. He was honored to have his work included in these proceedings and greatly enjoyed attending these conferences, which were held at various locations around the globe.

Donald was an avid hiker and bicyclist and loved the outdoors. He spent many enjoyable hours studying the stars through his home telescope before losing most of his eyesight, and he was riding his bicycle until just months before his death. He was a lifelong gardener and continued to enjoy his garden in his later years, listening to and identifying the birdsongs of the many birds that visited his birdfeeders and flowers. He especially loved Hummingbirds, and always included plants to attract those birds.

He was truly an exceptional person, admired and respected by all who knew him. He will be deeply missed.

The family would be deeply grateful if you would share your memories of Donald on his tribute wall.

In lieu of flowers a donation to your favorite charity is appreciated.

Donald had composed a timeline of the highlights of his life, shared here:

Master’s degree from University of Nebraska

1959 PhD in Mathematics from University of Toronto, studying under Donald Coxeter

1962 Began professorship at UW-Madison (where he taught through 1998)

1966 teaching in Budapest, Hungary as first in a mathematician teaching exchange program

Retired from teaching at UW-Madison officially in 1993, actually taught through spring of 1998

May, 1999 Organized (with Dorothy Washburn) a Symmetries of Pattered Textiles workshop at UW-Madison*

July 4, 2022 Donald departed this life at his home, surrounded by loving support. In his final weeks he visited with friends and family and reflected on the many blessings of his long life (while still expressing a desire for “a few more years”). His was a life well lived.